My parents had ten children from the years 1940 to 1950 although two of these children died, I’m not sure of the years or circumstances.

Emily was born May 1940 and died in August 1991. She was a nurse on Crown Street in Sydney for many years and married Malcolm Henry Small in Stockton in 1951. Malcolm was in the military, and was posted in New Guinea. They had a daughter Marlene, born in March 1896.

Ray was born in November 1941 and died in1995. He married Pearla Slade and he worked in Newcastle for many years as a farmer . Later in life he worked on the punt from Stockton to Newcastle. He had three children; Beverley, Denise and Cheryl George.

Daphne was born Sep 1943 and died in1990. She was also a nurse. She married Frank Hollinshead in 1960 and had two children; John and Peter Hollinsworth.

Max was born March 1945 and died in January 1912. He ended up owning the family farm and continued to operate the dairy cows. He married Gladys Robson in 1965 and they had four children. 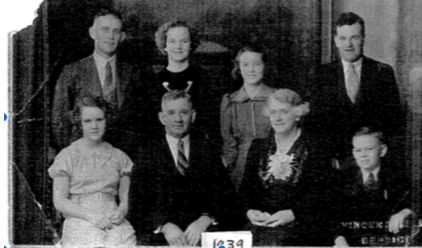 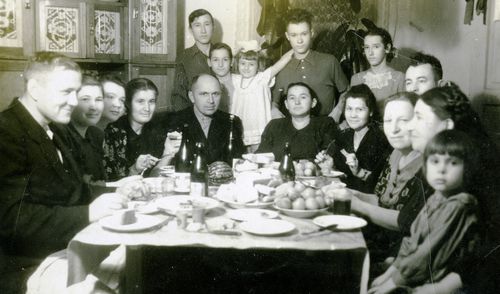 Dinner on the farm with the whole family